Recently, InfoWorld published the guiding article by Ruslan Synytsky, Jelastic CEO, explaining the simplicity of migration to the portable containers for Java applications and further benefits of scaling and easy management within Jelastic PaaS. Today we’d like to share this post with you.

Hardware virtualization was a great step forward in application hosting compared to the days of bare metal. Hypervisors allowed us to isolate multiple applications within one hardware platform, freeing us to use hardware resources more efficiently by hosting heterogeneous workloads on the same infrastructure. Still, virtual machines have massive overhead in terms of resource consumption, because each VM runs a fully dedicated operating system.

Containerization advances the benefits of virtualization much further by allowing containers to share the OS kernel, networking stack, file system, and other system resources of the host machine, all while using less memory and CPU overhead.

If your organization is wary of making the transition from VMs to containers, consider the following advantages of containers:

Jelastic is a Platform as a Service (PaaS) that offers managed containerized application environments for a wide variety of programming languages including Java, PHP, Ruby, Node.js, Python, and .Net. The platform was initially built on Virtuozzo containers, so when Docker’s container technology arrived, we already had strong expertise in containerization and quickly added support for the Docker standard. Because we support multi-cloud options (allowing the Jelastic PaaS to be used on various IaaS platforms), our clients can maximize container portability benefits by mixing and matching different cloud services and managing them through the same UI and API.

The Jelastic PaaS helps developers to migrate from hypervisors to containers more quickly and cost-effectively without application code changes. To show how we enable this transition, I will describe the structure and scaling process of a VM-based application running in GlassFish (Java EE application server), and how this monolith can be decomposed to containers using our technology.

In a typical GlassFish-based environment, the domain administration server (DAS) is a central management point from which all resources and applications in the cluster are configured and propagated to each worker Instance. Those workers host your web applications, web services, and other resources. 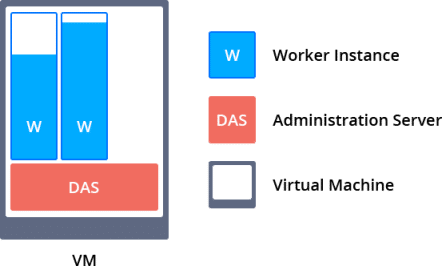 If you need to add a bit more resources to the same VM, you’ll need to move to a bigger machine, which in most cases will lead to downtime during the migration. This makes VMs inefficient in terms of vertical scaling. Furthermore, in order to scale a GlassFish cluster horizontally in VMs, you’ll have to:

This process must be repeated every time you reach the scaling limit and need more resources. These steps require a significant amount of time for implementation and can lead to human errors that negatively influence the whole project.

Making the Move: Decomposition to Containers

To migrate from VMs, monolithic application topology needs first to be decomposed into small logical pieces distributed among a set of interconnected containers. Each application component should be placed inside an isolated container. This approach can simplify the application topology in general, as some specific parts of the project may become unnecessary within a future architecture. 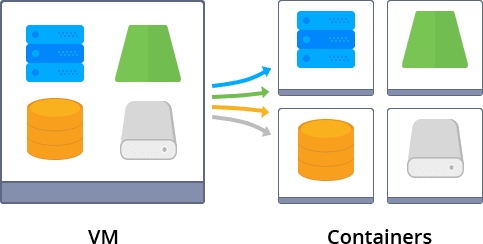 There are two types of containers that can be chosen for running the project: application and system containers. An application container (such as Docker) typically runs little more than a single process. It is more appropriate for building new projects, as it is relatively easy to create the required images using publicly available Docker templates and meet the requirements of the cloud-native approach from the very beginning.

A system container (LXD, Virtuozzo) behaves more like a full OS. It can run full-featured init systems like Systemd, SysVinit, and OpenRC that allow processes to spawn other processes like OpenSSH, Crond, or Syslogd together inside a single container. This is more preferable for monolithic and legacy applications, as it lets you reuse architectures and configurations implemented in the original design for running in VMs. 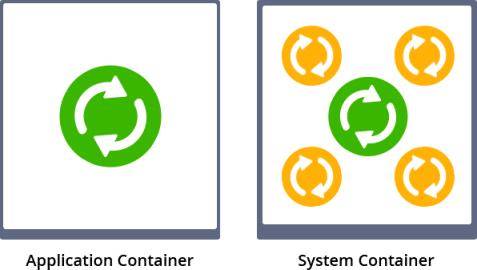 System containers offer multiple benefits when migrating an existing legacy application. IP addresses, host names, and locally stored data can survive container downtimes, there’s no need for port mapping, and you gain a far better isolation and virtualization of resources. Plus you get compatibility with SSH-based config tools and even hibernation and live migration of the memory state. The only perceptible disadvantage compared to application containers might be a slower start-up time as system containers are a bit heavier due to the additional services required for running multiple processes.

In Jelastic PaaS, it is possible to run both application and system containers. In contrast to other PaaS vendors that use the so-called Twelve-Factor App methodology, Jelastic PaaS does not force customers to use any specific approach or application design in order to deploy cloud-native microservices and legacy monoliths. Nor must developers modify their code to a proprietary API in order to deploy applications to the cloud. The projects can be up and running in just minutes using an application archive (for example) or just the link to the project in GitHub. This makes the entry point easier and more seamless, reducing go-to-market time and eliminating vendor lock-in.

Destination: GlassFish Server in a Container

The components of a GlassFish cluster are the same in a container as in a VM, but they are distributed across separate isolated containers. 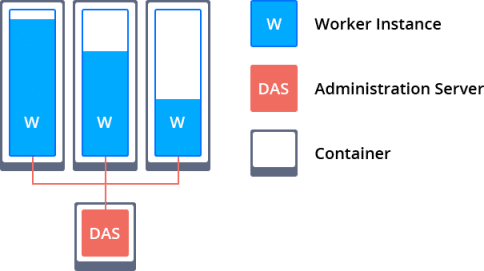 Worker nodes can be added or removed automatically, as well as attached to a DAS node using a container orchestration platform and a set of natively integrated automation scripts.

Jelastic PaaS hides much of the complexity of migration and automates scaling and clustering. Once the application is running in a containerized environment, the PaaS handles all the steps of the application life cycle and providing easy creation of development, test, and production environments and vertical and horizontal scaling out of the box. For example, there is already a pre-configured highly available GlassFish cluster with automatic provisioning of replicated instances. So developers do not need to write custom scripts to implement the required logic and can concentrate on coding.

Migrating from VMs to containers might seem daunting, but it’s actually pretty straightforward — and the long-term benefits are significant. By moving to containers you will reduce system resource consumption, simplify horizontal scaling, enable automatic vertical scaling without a restart, and increase infrastructure utilization by hosting different applications within a single physical server, all without compromising security. The final benefit that must be highlighted is the inherent portability of containers. The ability to move your containers across multiple cloud vendors means your organization can avoid vendor lock-in and take advantage of ever-declining cloud service costs.

Use of the Jelastic PaaS not only can ease the migration process but also simplify the scaling and management of your containerized workloads throughout the application life cycle. With the right automation and orchestration, developers and IT ops teams can realize the benefits of containers without deep knowledge of the technology, and instead focus attention on their core work.

Start your containerized cloud hosting with the right technology choice. Partner with our Jelastic PaaS platform to transform VMs to containers.